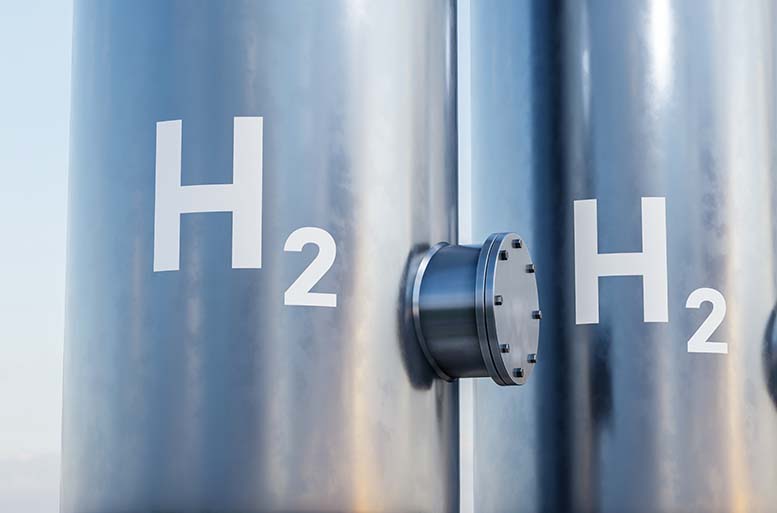 If hydrogen is a colorless, odorless gas, why does it have so many different colors?

Hydrogen is becoming an increasingly important fuel for use in power generation and transportation. By some estimates, “by 2050, hydrogen could power a global fleet of more than 400 million cars, 15 to 20 million trucks, and around 5 million buses, which constitute on average 20 to 25% of their respective transportation segments” (https://hydrogencouncil.com). And in the power generation field, reciprocating engine and combustion turbine manufacturers are all developing or adapting their equipment to burn some level of hydrogen. The reason for this is to help reduce or eliminate the emission of carbon dioxide during fossil fuel combustion and carbon dioxide’s deleterious impact on the environment.  But if hydrogen is a colorless gas, whatever its final use may be, how does it have so many different colors?

To define how hydrogen is manufactured, or more precisely refined from its source, industry has taken to describing hydrogen using a color. So when people in the renewable power industry talk about “green” and “blue” hydrogen, they aren’t talking about the actual color of the gas, rather how it was produced and how much carbon resulted from its production. “Green” hydrogen is produced by the electrolysis of water with no carbon dioxide emitted while “blue” hydrogen comes from fossil fuels with all of the resulting carbon dioxide captured or sequestered in some way. Both of these, when used for transportation or power generation fuel, result in no greenhouse gas carbon dioxide emissions.

The following are the currently recognized colors for hydrogen from different sources and using different refining methods:

The most common method of production of hydrogen in the USA is Steam Methane Reforming (SMR). This method uses high temperature steam 1,300 – 1,800 oF (700 – 1,000 oC) to produce hydrogen from natural gas or other methane source. In a two part reaction, steam reacts with methane under pressure in the presence of a catalyst to produce hydrogen, carbon monoxide, and a small amount of carbon dioxide. The carbon monoxide and steam are then reacted in the presence of a catalyst to produce carbon dioxide and hydrogen. While this method has a reasonable efficiency of 65 – 75%, the byproduct is carbon dioxide which is emitted to the atmosphere unless a method of capturing it is employed. SMR produced hydrogen is categorized as “Grey” hydrogen unless the byproduct CO2 is captured and either used for a useful purpose or sequestered. If that happens the hydrogen is then categorized as “Blue”.

“Green” hydrogen is produced by electrolysis of water using renewable power. As electrolysis of water does not result in any CO2 byproduct, this is the cleanest method for production of hydrogen when renewable electricity, which in itself has zero CO2 emissions, is used. However, the electrolysis process has an effective electrical efficiency of 70 – 82%. This means that producing 1 kg of hydrogen, which has a specific energy of 142 MJ/kg or about 40 kWh/kg, requires 50 – 55 kWh of electricity.

As hydrogen becomes a more popular fuel, different sources of hydrogen and methods of production are being investigated and developed. One source and method using electrolysis of aqueous ammonia (NH3) has the potential to produce hydrogen with an effective electrical efficiency of >100%. This means that unlike the electrolysis of water that requires more energy than is produced, the hydrogen generated will contain more energy than the amount of electrical energy required for its production. Bridgestone Associates is currently developing and evaluating an ammonia to hydrogen production process. In this process ammonia will be extracted from chicken manure and then converted into usable hydrogen. Even though the color of the original source in this process might not be green, the end result would be “green” hydrogen produced from a waste material.

For more information on the production and use of hydrogen as a fuel for transportation and power generation, please contact Bridgestone Associates, Ltd.