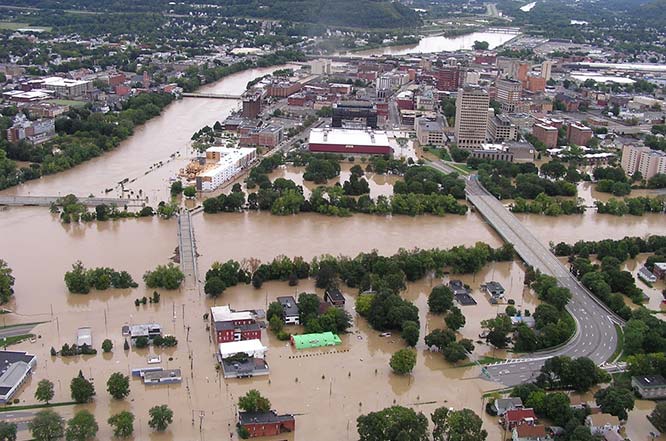 The Project was to study in detail the design, funding, and economics of a microgrid to connect key buildings in the flood prone City of Binghamton downtown area so they could continue to function in the event of a major grid outage.  The project was performed under Stage 2 of the New York Prize Program.  NY Prize is a first-in-the-nation competition funded by New York State Energy Research and Development Authority (NYSERDA) to help communities create microgrids – standalone energy systems that can operate independently in the event of a power outage.

At the confluence of two rivers, the Susquehanna and the Chenango, the City of Binghamton, New York has sustained more than its share of flood-related damages.  Major floods occurred most recently in 2006 and 2011 when much of the City was inundated. During these events, the City either lost power or experienced diminished services of electricity, potable water, police and fire protection, as well as housing.  Once implemented, a community microgrid will provide power to Critical Facilities and Places of Refuge which were affected during these two most recent major floods and will allow them to maintain operations for prolonged periods during a major grid outage. The design will greatly improve the resiliency of the surrounding area while significantly increasing the safety and well-being of residents, community organizations, public facilities and businesses in the City of Binghamton.